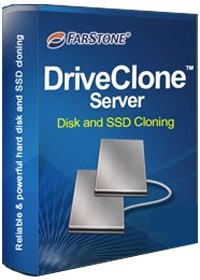 Total Backup Recovery is an All-in-one backup and disk imaging solution for business.

“True Clone” – Hard disk & SSD cloning expert”Users can use the cloned disk to boot on a system and use applications as if they were using the original system. Alternatively, users can store the cloned disk in a safe place as a ready-to-boot backup disk. “

DriveClone creates a universal bootable Mirror Drive, the Mirror Drive will be able to immediately boot on different computers for 0 time (RTO) disaster recovery. DriveClone is capable to clone system to a VMware or Hyper-v virtual image file. The virtual image file can be loaded & played directly in VMware and Hyper-v for 0 time (RTO) disaster recovery.

“a true ‘Clone’“ your product actually does provide a true ‘Clone’ of source drive, unlike some competitors that produce a non-bootable 8.1 clone. – William E.

“Your program did exactly what it said”The other programs said clone but none of them actually cloned the HDD. They would only clone a couple of partitions and my HDD which has 3 separate partitions for recovery in addition to the EFI and OS partitions. Your program did exactly what it said and that was to clone the HDD. It even allowed me to shrink the OS partition as the HDD was 750GB and the SDD was only 500 GB. Thanks again. – Bill

“Best free home edition cloning software”User friendly, works with WIN 8.1, some claim to – but don’t. Having updated from WIN 8 to 8.1, my factory settings were no longer a suitable backup, my cloned image holds my new OS and all my programs ready to go. – fulmar1

“Again, thanks for making a truly remarkable product”I I easily cloned my failing HDD onto a NEW Samsung 500-gb SDD in less than an hour. The transfer was seamless and the laptop booted up quickly (35 seconds from a cold start) and everything works perfectly. And I didn’t have to play games with Dell over their so-called proprietary CMOS and BIOS settings. I thought enough of your software to use it INSTEAD of the Magician cloning software that came with the Samsung SDD… Again, thanks for making a truly remarkable product. – apnewsman

“I’m very impressed. It worked”I have a Sony laptop and have been reading it is almost impossible to clone the included drive and have it work properly. I need to get the slow SATA drive out and a new SSD drive in. I’m praying your product will work.

The next day: “I just completed it and I have to say I’m very impressed with the product. It worked. I’ll keep the old drive as a backup. I will definitely recommend your product and use it in my business – Rick”

“Clone Intel 160 GB SSD to Samsung 840 EVO 500 GB SSD! It works.” I have a Lenovo T420S with Intel 160 GB SSD. I tried to clone my Laptop SSD to the Samsung 840 EVO 500 GB SSD using the Samsung Migration software. However, I got the message “The boot configuration Data for your PC is missing or contain error.” Samsung support confirmed that presently their migration software cannot clone Windows 8.1.” Your driveclone software works. I have sucessfully migrated to 500 GB SSD. – Greg.

“the only Cloning … without any problems” Until now Farstone is the only Cloning Tool I have tried able to clone a GPT HDD to a smaller SSD without any problems. First i bought a Samsung SSD and tried to use the Samsung software – but it did not work. Then I switched to an Intel SSD and used the software included in the package – but again with negative result. BR – Per Wehner